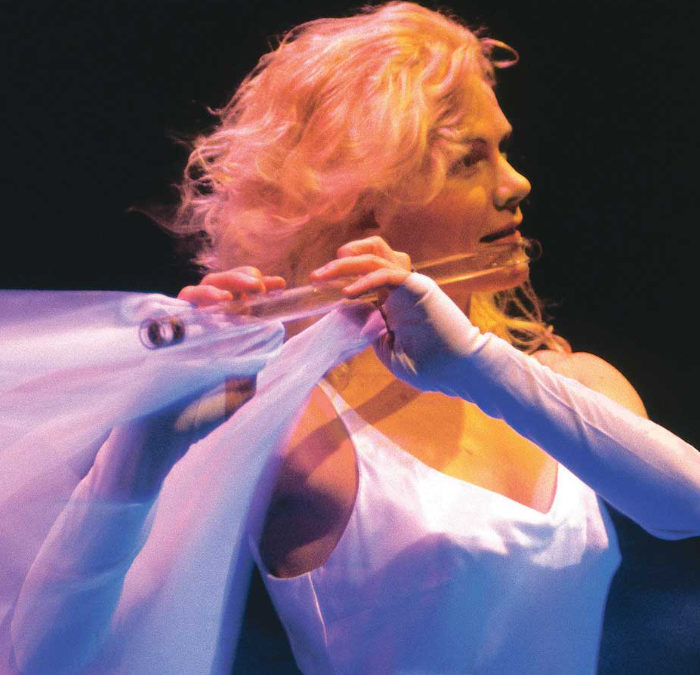 Rhonda takes the listener on a journey around the world with an assortment of ethnic flutes and her Gold flute, woven together by her stories.  Among the variety of flutes are Indian bansuri, crystal flutes, Pan Pipes, Native American flutes, Celtic whistles, the Chinese dizi, and more.  Her Virtual Band includes piano, acoustic guitar, harp, strings, accordion, synth, bass and percussion in a variety of ensemble configurations, while others are Larson’s adventurous writings for flute alone.  Her music merges the most soulful elements of sacred, classical, folk, Celtic and ethnic music.  The program consists chiefly of Ms. Larson’s original compositions, and is accessible to audiences of all ages and genre preferences.

Rhonda Larson is a Grammy Award-winning player of the flute, born and raised in the mountains of Montana.  This Big Sky Country in the Wild West helped form her into a nature-loving, free spirited trail blazing artist. She entered the national music scene by winning first prize in the National Flute Association’s Young Artist Competition at the age of 22, including a Carnegie Hall debut. Shortly thereafter, Rhonda was invited to join forces with the Paul Winter Consort, initiating her journey into a rich palette of music gleaned from around the world.

Composing much of her own music, Larson’s visionary force showcases her gold flute and an array of ethnic flutes in a new and refreshing light. Rhonda has also expanded the sonic capabilities of her instrument with entirely new techniques, most notably her inventive flute-and-voice unison, performed simultaneously.

Rhonda’s latest CD release, Live from China, features her band Ventus from a recent twenty-five city tour throughout China.  Most of the selections are Larson’s original World Fusion compositions, including arrangements of traditional Celtic, Armenian, Romanian, and Chinese melodies.  The recording offers a bonus track of Rhonda’s new solo, Metamorphosis, which took her four years to write due to its inherent complexities and inventive techniques she has developed further.  “No piece has ever taken this long to complete, but I really have no other choice than to humbly allow the time it takes for the music to evolve, and IT lets me know when it is ready to be offered.  The title speaks to its musical journey, but also as a metaphor to my own development on both a sacred and technical level.  My first priority is to artistic authenticity, hoping to better serve the odds of lifting people’s hearts—THAT is why I am a musician.”

Rhonda tours world-wide, and has a discography of over 20 commercial recordings, including two other solo recordings, Distant Mirrors, and Free as a Bird.  As a sought-after teacher, she conducts masterclasses at universities, flute organizations, community outreach events, and individual instruction.  She owns and operates her publishing company, Wood Nymph Music, producing her sheet music from graphic design to distribution.

Ms. Larson performed on a live CBS finale episode of “Survivor” from Madison Square Garden’s, seen by over 40 million viewers, and is featured in “Flute Stories–101 Inspirational Stories from the World’s Best Flute Players” publication.  She is a former Board member of the National Flute Association, and currently serves as a member of the World Flute Society Board of Directors.

Rhonda and her husband Dr. Lee J. deLisle live in Connecticut, and part-time at their home in the medieval village of Roccantica, Italy.  When not playing the flute, Rhonda can be found out-doors.